Got restless and decided to tour up towards Sunset L.O. There's about 6-7" of snow on the road up to the lookout. Not enough to ski, but plenty to tour.

The parking lot is also getting worked on and looks like it will be double for snowmobile parking. I was also surprised that there were two snomachiners leaving the summit lot and there were tracks up the Pilots road. 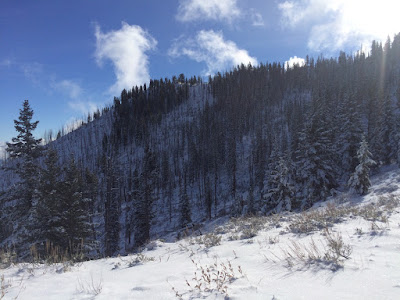 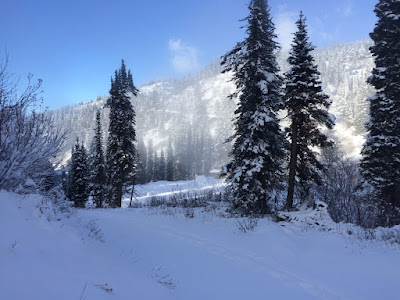 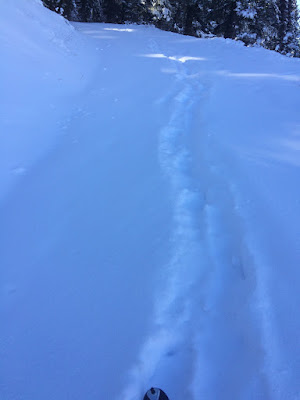 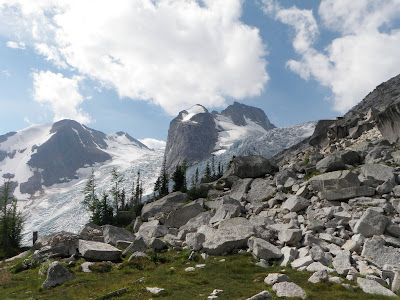 Bob Jahn and I had planned this trip for quite awhile and then waited to pull the trigger on going until the forecast was good for maximum climbing. This was important since I had read trip reports from people that were in their tent for a good portion of the time they were there. The weather can be fickle and hard to predict how the storms from the coast will hit the Bugaboos. 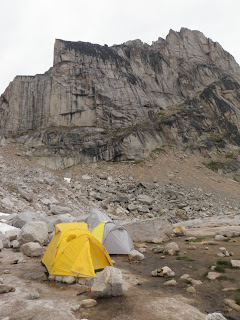 Camp at Applebee with Eastpost Spire behind.

The first night we stayed at the Boulders campground. We got up the next morning and decided to climb the Eastpost Spire and traverse down to check out the camping at Applebee Dome. This was a moderate (5.6) climb, but had great position over the valley as we traversed the ridge to the summit. We descended to the campground and packed up for the move to Applebee Dome. It is a very nice set up for staying awhile. It has water via spigot, clean bathrooms, and plenty of space. We selected a site near the approach for the Crescent Spire. We climbed a few pitches on great rock. We made it up the Crescent Towers and back before it was even near time for dinner! I had sprained my ankle on the hike into the Bugs and it wasn't letting up. I was dreading anything with a long approach. We wanted to hit Bugaboo Spire the next day. I was happy since it was fairly close. We soloed up the Kain Route and hurried back down due to thunder and lighting. Once we reached the col, it was not as bad. Bob wanted to see the East Creek bivy site below the Beckey/Chouinard. We trudged across the glacier and saw it. 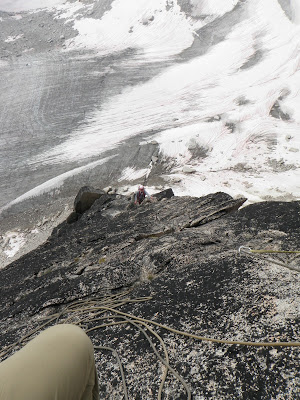 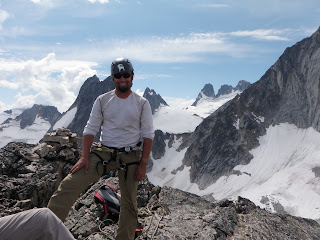 On one of the Crescent Towers with Snowpatch/Bugaboo col behind.

It seems like we didn't climb a lot, but when I read about other trips, getting 5 days out of 7 is pretty good luck with the weather. We were just on a reconnoitering trip and ended up climbing quite a bit! I am going to make a Part 2 of this post so I can put the things I wished I did/had or things I thought were good choices for this trip in preparation for next years trip to the Bugs (yes, it IS that good to make a yearly thing). 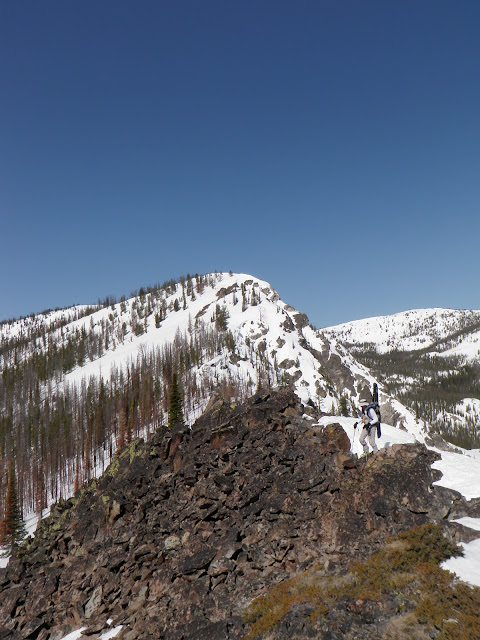 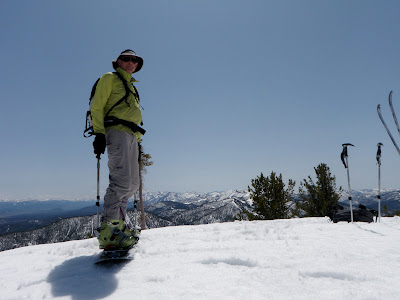 There is still some good skiing to be had out there! Bob and I threw a quick trip together to check on the Lola Lake area. I was thinking that we would just be blasting some corn on some faces, but the chutes were filled in and perfectly softening up when we got to the top! So I dropped into one and booted up another. We then ran a lap from the top of Lola point on perfect corn. 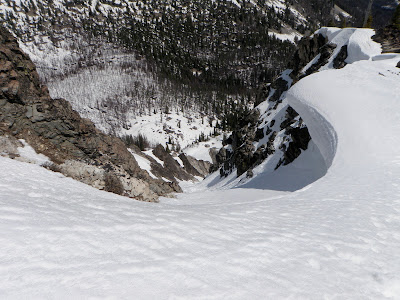 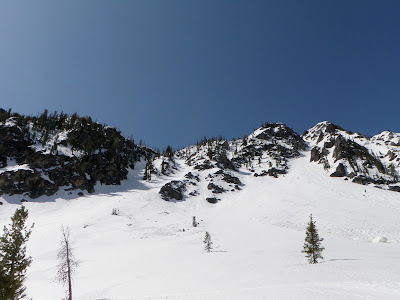 There is some dirt crossing on the lower elevations. Although, if you were going to ski Copper, you could probably stay on snow if you were following the drainage up to the N. side.

I've been training mostly for sport climbing, so I thought that my cardio would be an issue, but it wasn't. I fueled entirely on GU gels and lot's of water. I could have used some Hammer Perpetuem to fill in the lows the GU brought. Bob says that the 10 pounds of ski fat that I lost was probably the difference. Maybe. We had an Alpine start, so we were back in town with plenty of time for yard work and Birthday parties!
Posted by Ralph S. at 10:47 PM 2 comments: 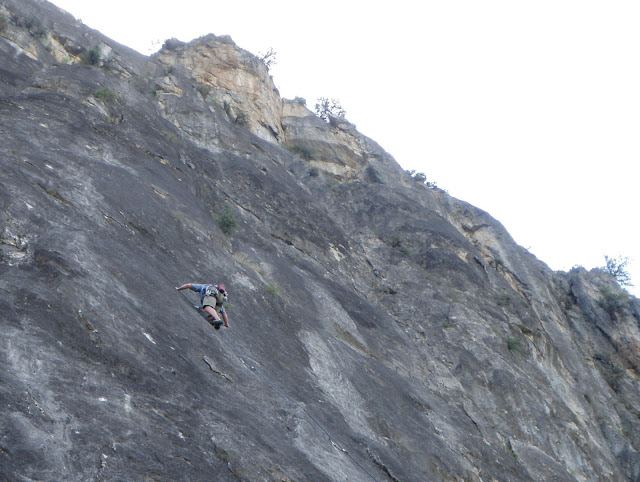 We went to Hell's Canyon and met up with Yoder and crew. Dave puts on the 4/20 event and there was a good turn out. Climbed up at Sleeping Monster wall. It has steep slabs that made my brain hum! Great weekend to be out. Also great for the ticks, snakes and poison ivy! 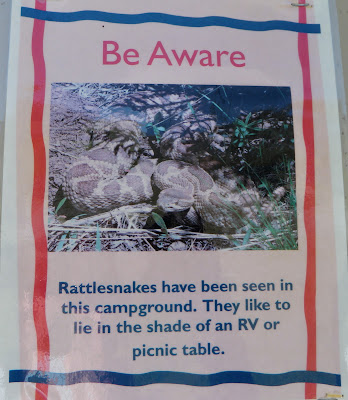 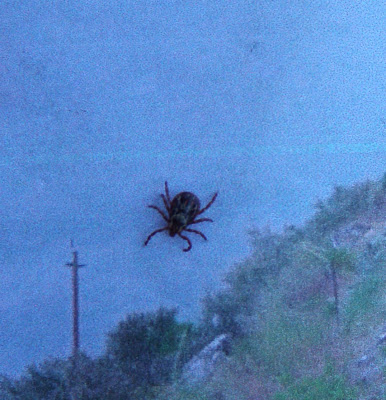 The ticks are almost as big as a power pole. 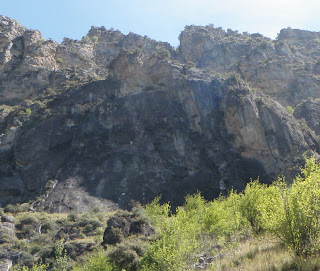 Can you see the Sleeping Monster?
Posted by Ralph S. at 7:36 PM No comments: 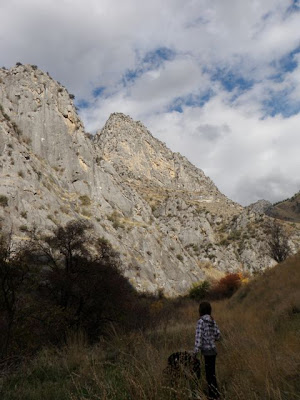 This is just a quick post with the places that I like to climb withing a 3-4 hour drive of Boise. There is a link to the current weather of each location and driving distance/time from Boise. I will try to evolve this into something more... maybe.

First Trip to the Copper Area. 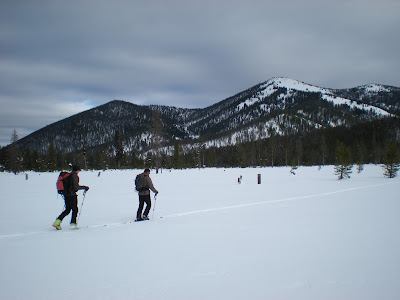 We took a trip up to Bull Trout and skied the North side and the SE side. Pretty good coverage for the first week of December. The picture above shows Copper. The top is pretty bare, but I hear that the snow on the other side is pretty awesome! Hike up and over and get back to me! 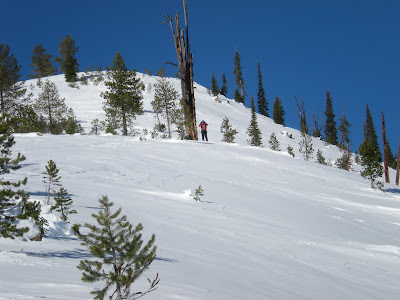 We skinned up and over and decided to ski one of the North side shots since it was stable and the snow was quite a bit better. 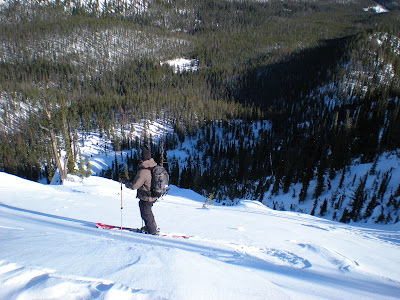 It's a fun shot that puts you out on the other side, but it's a fairly easy traverse back around. The turns were the best that I've had all year! 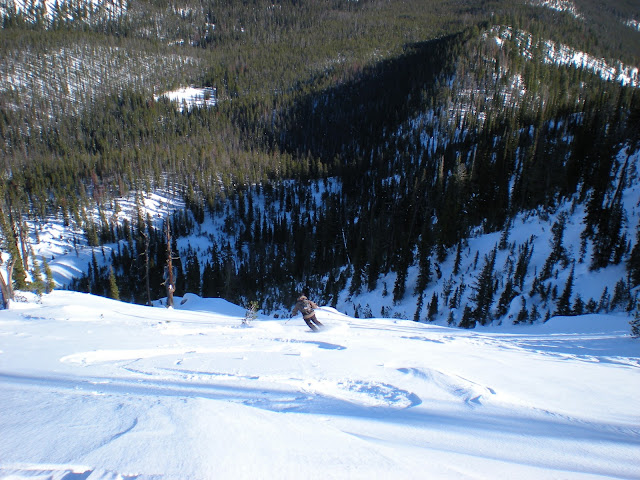 The turns are there if you want them and it wouldn't be a wasted trip. Get up there and get after it!!!
Posted by Ralph S. at 1:53 PM 2 comments: 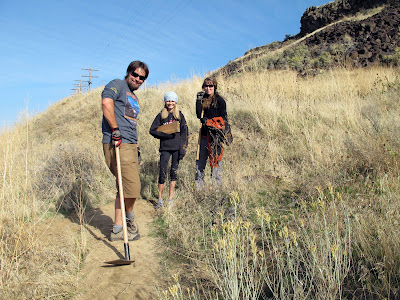 We helped to clean up the Black Cliffs this past weekend.  We also helped to fix some erosion issues.  There was a nice turn out.  The Boise Climbers Alliance did a great some of organizing the event.  I hope to get out this weekend and enjoy some of our work!
Posted by Ralph S. at 4:52 PM No comments: 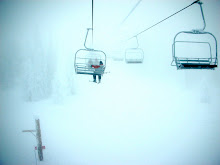